skip to main | skip to sidebar

Our work on the SpoolHead has been put on hold as we troubleshoot our plastic extruder. What would happen is that the extruder would work great on a fresh piece of PLA, but when we left it to cool and ran it again, it would be unable to extrude (even with Wade's geared extruder providing massive amounts of force). What could explain the extruder working perfectly at the beginning, and grinding to a halt the second time? 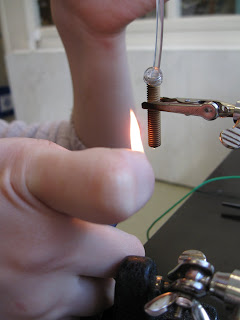 We're hoping to fix this as soon as possible, because no doubt there will be much troubleshooting of the SpoolHead as well. To understand the problem, we've been conducting some benchtop tests, observing how the PLA behaves inside the extruder nozzle.

Bing conducted experiments to determine why, after five minutes of successful extrusion, subsequent cooling and re-heating of the extruder caused it to fail. From our experiment, the resistance to flow due to viscosity through a narrow aperture is actually quite small; however, with the current Reprap-standard extruder design, a far more significant problem occurs. Because the nozzle is drilled wide, there is a void between the filament and the metal which fills with molten plastic. Even with a steep temperature drop at the front of the nozzle, and heat sinks, the plastic retains enough of its thermal energy to flow back up the nozzle and cool in problematic places. Indeed, steepening the temperature gradient with heat sinks seems to exacerbate this issue, because it becomes impossible for heat to reach this cooled plastic.

The problem is that the process is not quasistatic; because of the hot plastic's ability to flow rapidly up the nozzle before it can cool to the same temperature as its surroundings, the temperature distribution inside the extruder is not the same on the first run as it is on the second.

Here's how I visualize the process:

(This figure represents the extruder setup we were using, which had heat sinks to provide a steeper temperature distribution).

What to do about it?
The best solution would probably be Nophead's, which is to have a cone opening outwards, so that pressure on the fluid forces the plastic further outward, rather than back up the nozzle. However, I believe it is also important to maintain as small a void space between the barrel and the filament as possible. That means maintaining tight tolerances, both on the drill diameter of the extruder nozzle, and the filament itself. (Not all PLA filament is created equal.)

Using a PEEK insulator, which bonds relatively well to molten PLA, is probably not the best idea also. Having, if possible, a seal at the transition to the insulator would be of use as well. PTFE's tendency to flow is useful in this regard. We have made a PTFE insulator that is slightly under-drilled right at the end, so that it seals firmly against the plastic. Hopefully this will prevent backflow.

For now, we are also planning to have a wider nozzle at the tip, which will reduce the pressure that causes backflow. This will reduce our part-printing precision, but that's not really a concern for the SpoolHead project, because the plastic extruder merely needs to work.
Posted by jbayless at 12:54 PM